Click on the Plane to experiment with the Forces of Flight

When an airplane flies, the wing is designed to provide enough Lift to overcome the airplane’s Weight, while the engine provides enough Thrust to overcome Drag and move the airplane forward. The Thrust of a rocket engine overcomes the Weight of the object to move the rocket forward.

Lift is the force that acts at a right angle to the direction of motion through the air. Lift is created by differences in air pressure. Airplanes use airfoils to create lift using Bernoulli’s Principle. Lift is the opposite force to gravity or weight.

Drag is the force that acts opposite to the direction of motion. Drag is caused by friction and differences in air pressure.

By making something more aerodynamic, you reduce the drag, allowing you to go faster and be more energy efficient.

Thrust is the force that propels a flying machine in the direction of motion. Engines produce thrust.

Without thrust, the airplane or bird would fall to the earth. It is thrust that moves the plane, bird or object through the air. 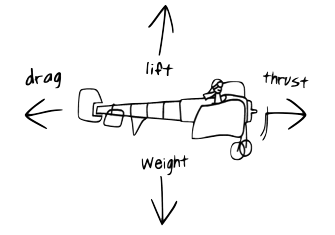